صفحه اصلى >> English Articles >> Mulavi Abdul Hamid: Plainclothes people shot at the heads and hearts of the people and worshipers of Zahedan 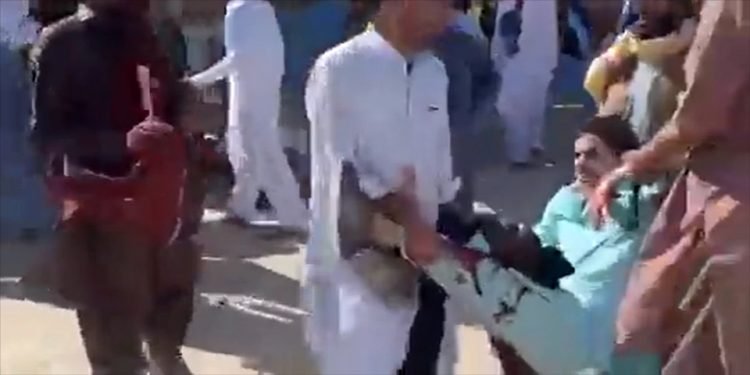 Mulavi Abdul Hamid: Plainclothes people shot at the heads and hearts of the people and worshipers of Zahedan

In a video message, Mulavi Abdul Hamid, Imam of Ahl al-Sunnah Zahedan, called the killing of the worshipers of this city by the government a “disaster” and “unprecedented injustice” and said that the plainclothes were aimed at the heads and hearts of the people who were returning to their homes and had no weapons.

In this message, which it’s text also published on the website, Mulavi Abdul Hamid said: In response to a small number of youths who threw stones at the police station, the government agents fired combat bullets at the people.

He added: “According to the reports that reached us, the forces of the special unit were apparently already stationed in the mentioned police station.”

According to Zahedan Friday Imam, the forces of the Islamic Republic not only shot at the youths who had gathered in front of the police station, but also “shot at those who were praying and they throw tear gas in the men’s and women’s sections, so that one of the praying women is also martyred.”

He continued: “This is despite the fact that none of the people inside the mosque had raised any slogans.”

According to Mulavi Abdul Hamid, “armed people in plain clothes who were stationed on the roofs of the houses are also shooting at the people who were returning to their homes, and the significant point is that most of these shots were fired at the heads and hearts of the worshipers, which is clear, “This was done by snipers.”

Mulavi Abdul Hamid emphasized: “In this incident, unarmed and defenseless people who had performed ablution and had gone to mosque only to perform Friday prayers were shot at.”

The Iranian Human Rights Organization reported on Sunday, October 2nd, that in addition to the killing of protesters during the nationwide protests of the Iranian people that began after the murder of Mahsa Amini, the security agents of the Islamic Republic of Iran on Friday, September 30th, killed protestors in Zahedan city, Sistan and Baluchistan province. They shot and killed more than 40 of them.

The Iranian Human Rights Organization condemns the killing of protestors in different cities of Iran, especially the recent killing of Zahedan, in the strongest possible tone and considers it a “crime against humanity”.

Mahmoud Amiri Moghadam, director of Iran Human Rights Organization, said: “Killing protesters in Iran, especially the killing that took place in Zahedan, is an example of a crime against humanity.” “The international community is obliged to follow up this crime and prevent new crimes by the Islamic Republic.”

On Friday, September 30th, a rally took place after the Friday prayer in Zahedan in protest of Chabahar’s police commander’s assault on a 15 year-old Baloch girl, which was accompanied by the bloody repression of dozens of protesters at the hands of security agents. “Campaign of Baloch activists” has published the names of 41 people killed.

The Tasnim news agency, affiliated with the IRGC, wrote on Sunday that with the death of one more person, the number of IRGC and Basij deaths in connection with the Zahedan protests reached five.